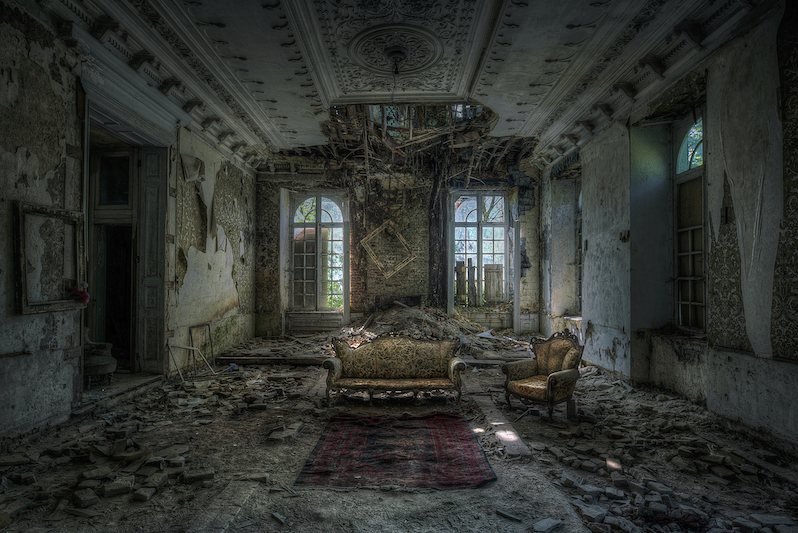 We all know that building; there’s at least one in every town. Perhaps it’s the crumbling old mansion on a hilltop that’s said to hold antique treasures or the once well-loved but now decaying Grade II listed pub that’s not had a landlord in years. Or maybe it’s the creepy house that was abandoned years ago under strange circumstances, from which people say they can hear whispering in the night.

Given the mystery and intrigue that often surround these sites and buildings, it’s not surprising that some people would be interested in visiting them. What is surprising, however, is how these places have now become a huge internet phenomenon known as ‘urbex.’

So, what exactly is urbex? And how did it become so popular online?

Urban exploration, more commonly known as ‘urbex’ is a hobby that’s currently taking the online world by storm. Most urban explorers are simply individuals or groups that visit abandoned places, usually armed with a camera, some sturdy shoes and a sense of adventure. Your average urbexer will research locations, evade security guards and set up social media channels where they can document and share their experiences with a fascinated audience.

Urban exploration channels on social media are so popular that there are now some urbexers that can earn vast amounts of money from their hobby. One of the best-known examples is The Proper People, a YouTube channel dedicated solely to exploring abandoned locations.

With videos featuring atmospheric music, beautiful panoramic shots of eerie landscapes and compelling narration, it’s clear that these creators have the money and expertise to turn urbex into something of an art form.

Therefore, it may be no surprise that the channel boasts a massive 1.29 million subscribers and over 5 million views on their top videos. This means that the channel will likely be earning over 60k per year, not including the additional income from things like merch, collabs and other social media accounts.

There are countless channels like this on YouTube, with the term ‘urbex’ generating thousands upon thousands of search results. Many of which use typically ‘clickbaity’ titles such as “URBEX GONE WRONG!” or “POLICE ENCOUNTER!” which seem to be pretty effective in grabbing people’s attention considering the tens if not hundreds of thousands of views some of these videos have.

But It’s not just YouTube where urbex content is proving to be super popular. As well as the endless local and global Facebook and Instagram accounts run by well-known urbexers sharing their content, news outlets are also consistently churning out urbex related articles, many of them showcasing urbex gems currently fascinating the urbex groups.

Some articles introduce us to specific urbexers, such as this article from Somerset Live, which focuses on the work of Adam Corkill, who “has made it his mission to bring to life the 'memories' of the region's forgotten buildings.”

Pieces about specific locations are also being frequently published; for example, Northants Live’s article on the “Fire ravaged Northamptonshire country house left to rack and ruin” discusses the eerie and derelict Cosgrove Hall. In Glasgow Live, readers are shown pictures and descriptions of a “creepy abandoned orphanage outside Glasgow”.

The lure of urbex

So we know that urban exploration is becoming more mainstream, both as a real-life hobby and a social media trend- but why? What’s the appeal?

Type the term “urbex” into Google, and you’ll find yourself inundated with websites, videos, articles and more, most of which include variations of terms like “eerie,” “mysterious”, “abandoned”, “untouched,” “haunted” “historical” and “time capsule”.

Judging by how often these terms are used, it seems that the lure of urban exploration is twofold. Firstly, it’s the historical element. Watch almost any urbex video, and you may find it hard not to be moved by the decaying pairs of shoes waiting indefinitely by the door for their owner to slip their feet into, or the blackened, rotten remnants of food still sitting on the kitchen table.

Or maybe it’s the dusty photographs of long-dead faces placed on the peeling walls that’ll get to you- ghostly images of the people that once lived in this very place, but that now have seemingly been entirely forgotten. Only to be brought back in some way by people who may catch a glimpse of their image in the background of an urbex video, and wonder who they were, and what kind of life they led. Perhaps the viewers of the video being the only people that have thought about their existence in decades.

Additionally, given that some of these places were abandoned decades ago, many of which are still filled to the brim with personal items such as furniture, pictures and knick-knacks, seeing into one of these buildings is essentially an opportunity to step back in time.

The second element of intrigue seems to be the morbid curiosity – or the “spook factor” – that comes with urbex. It’s the sobering knowledge that any of us could end up just like this after we die. One day it could be our home that’s left to crumble into disrepair. Maybe the only proof of our existence will be an old house with bits and pieces of our everyday lives waiting to be discovered inside.

And, of course, there’s the more visceral spooky stuff. There will always be a level of fear that comes with walking around a silent, sinister old building with a murky past. Some great examples of these are slightly clickbaity, yet still chilling YouTube videos such as Uncharted Travel’s “Staying The Night ALONE In The SCARIEST Abandoned House” or OmarGoshTV’s “House Is So Haunted A Psychic Refused To Enter”.

Watching these often lone explorers walk through eerily quiet rooms as they step on creaking floorboards and brush away cobwebs demonstrates perfectly why people get such a thrill from witnessing others explore urbex locations from the safety of their sofa.

There always seems to be some kind of controversy surrounding any social media craze. Urbex, sadly, is no exception. Just look at any urbex social channel with a large following, and you’re bound to find an argument somewhere in the comments section. After all, who doesn’t indulge in the occasional keyboard war?!

The disagreements people have when it comes to urbex generally surround:

When it comes to the issue of trespassing, people often have a lot of very strong opinions that they aren’t afraid to share. For example, a YouTube channel called Abandoned Explorer, with 259K subscribers, has a pretty controversial video, titled “Police Arrest Us While Exploring An Abandoned Mansion”.

While many commenters are in support of the urbexers in this instance, making encouraging statements like: “What a beautiful place, lovely possessions too, thanks guys.” Or “That’s a great find,” some people have been far more critical.

“So you crawl through a window into someone’s house, that’s full of stuff, then argue with the bill when caught?”

“…The way you handled the cops was really bad.”

While these comments seem relatively tame, there’s nothing that seems to get the urbex community more irate than when it comes to stealing or breaking items. Things got pretty heated in the private Facebook group, Abandoned Places UK, when a member recently asked, “Have you or would you take something from a property on an exploration, if you knew it was worth good money?”

Comments ranged from light-hearted jokes such as “As long as you shout "Yoink" you can take what you want, that's the rules…”

To people who were not afraid to show how seriously riled up they were feeling.

“I'd hope if you did you'd have an unfortunate accident involving your fingers!”

While these people seemed to be very much of the opinion that taking things from abandoned places is completely unacceptable, some others very much disagreed. So much, in fact, that they were pretty angry with those who DIDN’T approve of taking items.

“Everyone's so moral. The fact people are trespassing and contributing to the buildings destruction by sharing/splashing pictures all over the internet is irrelevant?”

“I cannot bear the sanctimonious and hypocritical responses you get to these types of questions.”

This seemingly innocent question proved so controversial that it generated a massive 149 comments in a group where the average number of comments per post is generally around 10 – 15.

However, it’s not just on social media that these controversies play out. There are also plenty of media outlets getting in on the urbex drama. The Boar recently published an article entitled “Urban exploration: unethical and dangerous, or an untapped moneyspinner?”

In the article, the author discusses the huge risks urbexers face when entering these places.

“These range from the questionable structural integrity of buildings to aggressive guard dogs, and, perhaps most worryingly, poisoning from asbestos and other chemicals.”

She also talks about the near-legendary status of some of the locations, and the thrill associated with uncovering their history. The author writes, “Does the appeal lie in the reminders of human existence; rooms, buildings and even whole towns frozen in time, a snapshot of the past?”

Blog post written by Clare, lover of literature and all things history.