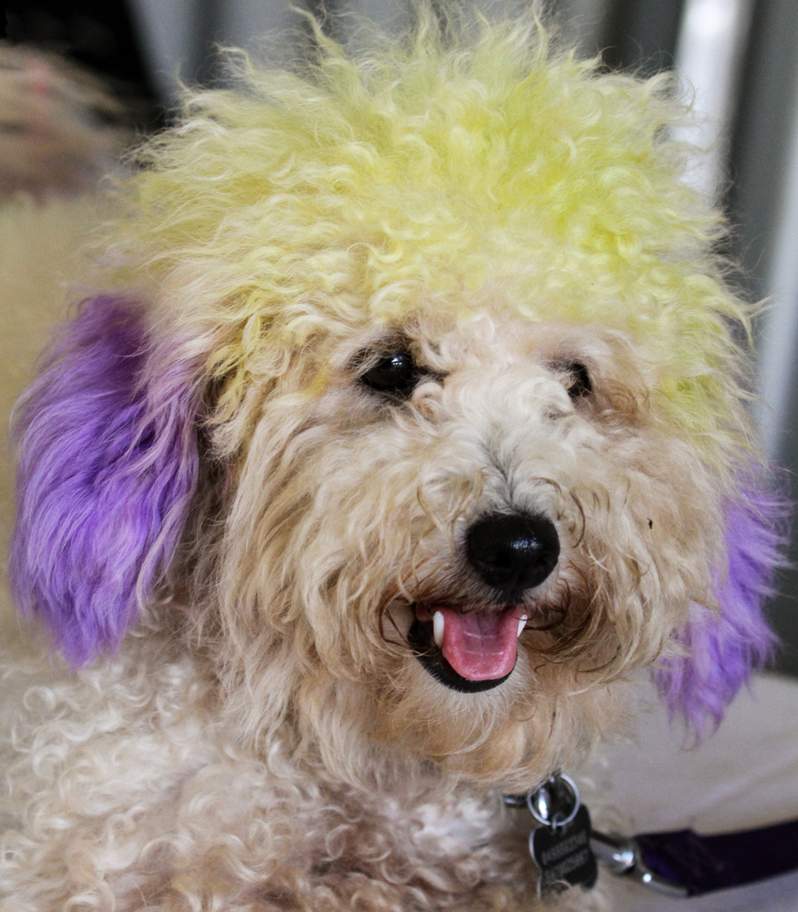 Lena Lenina, a Russian writer courted controversy in 2015 after dyeing her cat for an ‘all pink’ party. The kitten, was rumoured to have died from ingesting toxic chemicals present in the dye however, images were later released on Lena’s Instagram account picturing a somewhat less-pink cat alive and well. Her actions were still heavily criticised by animal lovers around the world. Russian artist and cat-lover, Yuri Kuklachev, described the stunt as ‘pointless and unnecessarily cruel.’ U.K readers were equally shocked, when news reached papers such as the Mail, Metro and The Huffington Post, with readers commenting:   Brenda Jeanne Loomis · "Forget the hair dye! In the second photo, the cat is standing on a pile of butcher knives! Which is more concerning? Hmm?" Like · Reply · 29 · 2 March 2015 17:30   Kelly Yung · "Brenda, I didn't notice that, you’re right, that's really concerning. Some people really shouldn’t have pets. Actually, I don't think she should have children either if she'd let a cat stand on a pile of knives – I wouldn't want to imagine what a child would get up to!" Like · Reply · 17 · 2 March 2015 19:10 Lisa O'Malley · "Witless wonder" Like · Reply · 8 · 2 March 2015 18:36 Comments Sourced: Huffingtonpost.co.uk However, it would appear that fashion-led trends are becoming an increasing concern for animal rights organisations. Amongst such trends are dyeing or tattooing animals, gluing gems to animals, confining, frightening or accessorising animals for cosmetic purposes.

There are some forms of animal dye which have been approved as safe to use on animals however, unless there is a real reason in which to use it such as dyeing rhino horns or elephant tusks to deter poachers; owners should consider the emotional cost it may have to the animal having such an outlandish appearance. Some animals, and herd animals especially, may find the appearance of their companions alarming. Horses have been known to spook at shows in which fancy dress competitions take place. Whereas the fancy dress costumes can instantly be removed after the show; dyed fur takes far longer to wash out.

I am not fashion jewelry

Confining animals in the name of fashion has also grown as a trend. Worryingly, live animals are being captured and cooped up in small caged-like fashion accessory pieces. Chicks and small birds have been incorporated into head piece designs, and small rodents into bold statement neck piece.  Fashion jewelry has even been created for our feline friends to ‘bling their bum’, enhancing the aesthetic appearance of their, well, bum. Designed to hang from their tails, this product has been outlined as a potential choking hazard should the cat attempt to groom itself and swallow the product.

We are not an Easter present

In an article on PETA, video footage reveals the alarming process behind dyeing baby chicks bright colours, which were sold on as Easter gifts. The article noted, ‘no doubt some of these tiny, delicate birds sustained injuries—and all the animals felt fear as they were roughly drenched with dye.’

‘These neon-hued chicks are more likely to be seen as “toys.” Children should never be taught to view animals as playthings: Rather, kids should be taught to respect the rights of all living beings. Oftentimes, chicks given as gifts for Easter are abandoned even faster than their colours fade.’ We are not a Valentine’s Gift Another alarming and increasingly popular gift is to buy fish off the internet for Valentine’s Day; but not just any old fish – tattooed and dyed fish. According to fishchannel.com, there are four main methods in which people will attempt to colour fish: Injecting a paint under their skin: This was done with transparent fish, and gave rise to the painted glassfish. Recently, I've begun seeing glass catfish similarly "painted." If you ever are able to handle a dead one (and if you buy one, you likely will be able to), you can lightly squeeze the paint stripes and see them move: they remain fluid, under the fish's skin. Soaked in dye: This is a literal as it sounds. Tattoo the fish: This is different from the injection of paint in that a tattoo gun is used, rather than a hypodermic, and the dye is located in layers of the fish's skin, rather than completely underneath it. This has been responsible for the hearts, flags, and other patterns. "Juiced" with hormones: Fish are kept in water containing large amounts of artificial hormones.

Joshua Wiegert, author of the article notes, ‘Such practices are problematic in that the process greatly damages the fish, and many of them perish. The mortality rate of painted glassfish is among the highest of any freshwater fish in an aquarium store. Often injected with dye using a non-sterile syringe, the fish are kept in non-sterile containers. The dye will eventually fade and leak out of the fish's system, so they are thrown in shipping containers as soon as possible into overcrowded bags, stressed, and shipped across the world.’ However, it’s not just celebrities wanting the shock factor or internet stockists who are culpable for defacing the animal’s natural beauty, and for treating them like a doll or toy; every-day owners are leaping on this bandwagon trend and have taken sheers to their poodles and dyes to their ponies

I am NOT a My Little Pony character


Although many would argue that dyeing your horse’s mane and tail looks ridiculous; providing that the dye meets approved standards, the process is relatively harmless. The greater concern which animal rights campaigners are seeking to address is the processes in which the quality of the animal’s life or indeed life itself is at risk. A greater awareness is needed regarding the processes dyed chicks or tattooed fish undergo, so that potential buyers are aware of and deterred by the horrific practises used to achieve what may be deemed ‘fashionable’ or ‘cute.’ Feature Image: Credit to lenaleninaofficial via instagram.com